Ephesus Tours from Izmir
Izmir, is located at the western part of Turkey. It is the 3rd largest city of Turkey having population over 3 million people. The largest export port of Turkey. Known as Smyrna in the ancient times. First settlement dates back to 3000 BC. Since the modern settlement was made on top of the old one there is not much to be seen in downtown Izmir. Highlight of the area is Ephesus. Ephesus is located 50 miles south of Izmir, an hour drive.

Ephesus, was one of the 4 major cities of the ancient world having population over 200.000 people. Selected as the capital of Asia Province of Roman Empire by the nephew of Julius Galius Caesar known as Augustus, named as Octavius. Served as a capital until Constantine ordered the expansion of another city located 400 miles north of  Ephesus. He named this city as Constatinopolis and selected this city as the new  capital. Ephesus today, considered as one of the most well preserved
ancient  cities of the world.

Below please find  suggested tour programs. If you would like to make a  combination of the sites just contact us. For tour bookings please click here for Tour Booking Form
IZMIR No.1
Half Day Tour of Ephesus from Izmir (5 hours)
Your journey through time begins with a pleasant drive along the Aegean Coast. After an hour drive your first stop will be the Temple of Artemis, one of the 7 wonders of the  ancients world. From here you will have the opportunity to view the Basilica of  St. John and the 14th-century Isa Bey Mosque. After a short drive you will  arrive to the ancient city of Ephesus. At one time, the city was the gateway to  Asia Minor and boasted a population of 250,000. Formerly a seaport, it now lies  several miles inland due to deposits of  river silt that have collected over the  centuries. The region is steeped in history, The Virgin Mary reputedly spent her  last days at nearby Mt. Pagus. As you walk along the old marble streets, you  will pass the Odeon and Upper Agora. You will also see the ornate Hadrian  Temple, the remains of some Byzantine houses, the beautifully restored facade of  the Celsus Library, the Thermal Baths  of Scholastica, the Commercial Agora and  the theatre, which accommodates 25,000  spectators and is still used for  occasional performances. Continue along the colonnaded harbor boulevard, past  the gymnasium and the remains of the stadium,  as you head toward the exit gate  and the lower parking area. Return to Izmir.

IZMIR No. 2
Full Day - Ephesus + Lunch (6 hours)
Boarding your vehichle at port of Izmir, drive south to Selcuk Town. En-route see the cotton fields, vineyards and pine woods while driving along the blue Aegean shores. Continue to Ephesus where you start at the Magnesia Gate  and  walk downhill through the city.Your guide will point out the sights, bringing  the history of Ephesus to life as you pause at the Odeon, Upper Agora, Town  Hall, Fountain of Trajan, Temple of Hadrian and Domitianus, Memmius  Memorial,  Roman Baths, Terrace Houses aextarordinary Library of Celsus. At the  end  of a marble street leading from the library, gaze up at the impressive   amphitheater, built to seat 24.000 people. Enjoy a lunch in the grounds of a   country house. Here you will see a private demonstration of the
traditional   carpet making process from dying to spinning to weawing at a school where young   girls are trained in the craft. Your last stop will be the visit to the Isa Bey   Mosque, a delicate masterpiece of Turkish architecture from the fourteenth   century. Afterwards drive back to Izmir.

IZMIR  No.3
Full Day tour of Ephesus,  House of Mary & Basilica of St. John (8  hours)
Biblical sites, including Mary's last-known dwelling place, the  ancient city of Ephesus and a relaxing
luncheon are featured in this  fascinating, full-day excursion. As your vehicle  makes its way along the Aegean  Coast, you will pass some of the regions fertile lands. As you reach the silted  valley, time seems to come to a halt and then reverse. After a steep drive up  Mt. Pagus, you will arrive at a stone chapel.  This converted house probably  dates from the 1st century and was envisioned by a German nun as the site where  the Virgin Mary spent her last days. Continuing to Ephesus, leave your coach at  the parking area and proceed on foot through  Magnesia Gate. As you stroll along  the old marble streets, you will pass the Odeon and Upper Agora. You will also  see the ornate Hadrian Temple, the remains of some Byzantine houses, the  beautifully restored facade of the Celsus Library,  the Thermal Baths of Scholastica, the Commercial Agora and the theatre, which  accommodates 25,000 spectators and is still used for occasional performances. After your  visit to Ephesus, re-board your vehicle for an enjoyable lunch.  Afterwards enjoy a presentation about Turkish weavings , see the girls at the looms  knotting carpets  and kilims. Learn about the natural dyes and learn the  differences between Silk  , flosh , wool and cotton weavings for handmade rugs.  The proprietors will give  a fascinating demonstration of the local traditional  crafts. Next is the  Basilica of St. John, one of the seven churches of Asia  Minor, is your final  stop before your return to Izmir.

IZMIR No.4
Full Day (8hours)  Ephesus  & Villages
Meet with your guide in front of the Izmir port or  airport passenger Terminal. Depart the pier for the an hour drive to the  magnificent site of Ephesus. Ephesus is the best preserved of the Greek/Roman  cities in Anatolia and  while you are visiting the ancient ruins of this  magnificent site and your guide  will bring them alive. You will see the  beautiful Celsus Library, restored and reconstructed according to its original  form by the architect  Friedmund Hueber in the 1970's. The most spectacular  building of Ephesus is the Grand Theater, built during the Hellenistic age to  hold 25,000 spectators. The city was also the hometown of great philosopher  Heraclitus. After a visit to Ephesus Antique  Site, you will arrive at Sirince  Village. This old Orthodox Village, 30 km from Kusadasi, was once  "Cirkince"(ugly). Indeed its inhabitants gave this name on  the purpose as they  did not want to be bothered by foreigners nor to share the beauty of their  village. Still after years, visitors understood that the village  was not ugly  and called it "Sirince" (pretty). Today the village is a perfect ynthesis of  Turkish-Greek culture as of the 1920's; after the Turkish Independence War,  people exchange between Greek and Turks has occurred and all those typical  Greek houses, though they kept their original outside  characteristics, have  received the local layout inside. At Sirince Village you  will have chance of  seeing the local life at a village and purchasing some small  local souvenirs  and handicrafts. The village is also famous for its local grape  and other fruit  wines. During the lunch, mingle with the local people of the  village. Have a  cup of traditional Turkish coffee at the main coffee house of  the village. Your  last stop will be the visit to the Isa Bey Mosque, a delicate  masterpiece of  Turkish architecture from the fourteenth century.

IZMIR No. 5
Full Day Excursion to Pergamum (8 hours)
Boarding your vehicle in Izmir port drive to the north of  Izmir, pass fertile fields and olive trees, to the present day, modern town of  Bergama, once known as Pergamon, a great center of culture. The ancient city was  a capital of the Pergamon Kingdom, and it was here that parchment paper was invented. Today, Pergamon is one of Turkey's finest archaeological sites. Drive up to the Acropolis, to see the remains of the citadel and the city walls, the foundations of the Zeus Altar, and the Royal Palace. The famous Pergamon Library  once contained 200.000 scrolls which were a gift to Cleopatra from Mark Anthony.  Walk through the Agora and see the restored Trajan Temple and the remains of the  Demeter, Athena and Dionysus Temples. On the steep slopes of the Acropolis you  will visit the Theatre, which once held as many 15.000 spectators, view the town  and its surroundings from this site. Continue to the town en route, see the Red  Basilica which was used as a temple dedicated to the Egyptian goddess of Serapis.  Enjoy lunch in local Restaurant of Bergama and have a taste of Turkish food. In  the afternoon, visit the Asclepion, a healing center from the 4th century BC and  one of the most important sites of Pergamon. Here patients had herbalistic,  aquatic and psychological treatment. Visit the Temple of Asclepios, the theatre,  and walk through the sacred corridor and down the ancient, arcaded, marble-paved  boulevard. Afterwards see a private demonstration of the traditional carpet  making process from dying to spinning to weawing at a school where young girls  are trained in the craft. Learn about the natural dyes and learn the differences  between Silk , flosh , wool and cotton weavings for handmade rugs.

IZMIR No.6
Full Day Excursion to Sardes (8 hours)
This tour is for those passangers who have previously visited Ephesus. ,The air conditioned vehicle will depart in the morning for an hour and a half drive inland to the ancient city of Sardes, one time capital city of the Lydian Kingdom, and the home of the fabled King Creosus and his riches. The army of Alexander the Great camped on the site; and later on, with the arrival of Christianity, one of the Seven Churches of Asia Minor was built here. In Sardes, you will visit the ruins of the Temple of Artemis, the remains of the Byzantine Church, . Extensive archaeological exploration and some restoration of certain structures has been accomplished by teams working under the aegis of the University of Harvard and Stanford. As you stroll along the kingsway, you will see the remains one of the oldest Synagogues in Asia Minor and the wonderfully restored facade of the Gymnasium where both scholars and atlethes were trained. Enjoy your lunch at a local Restaurant Drive back to Izmir Upon return visit Kemeralti Market area, here see Kizlaragasi Han. The Ottoman Inn from 18th Century which is a fine example of the architecture. Browse through the narrow streets and enjoy shopping before return to the ship.

*  For the reservation, kindly advise us the following:
- Your Full Name
- Number of people in your party
- Date of Arrival
- Name of the Cruise Ship/Flight/Hotel
- Time to start the tour
- Tour code or name 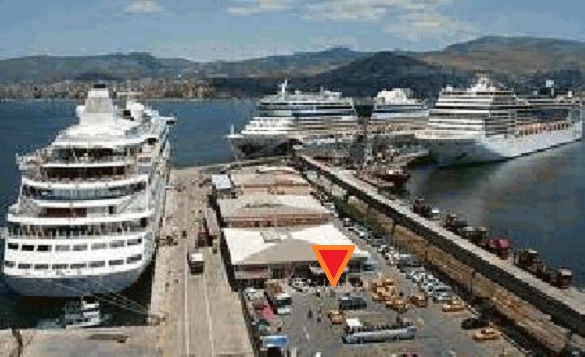 Izmir Port Meeting Point
Your private tour guide will meet you in front of Izmir Port Passenger Terminal. He will be holding your name sign.

For more information, please contact us
TransBalkan Tours is a fully licenced tour operator and a member of TURSAB. License: A 776.