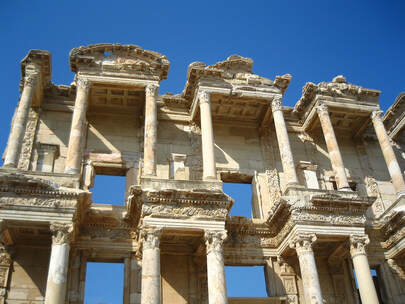 Ephesus Tours from Kusadasi
Kusadasi, is located at the western part of Turkey. 60 miles south of the 3rd largest city  of Turkey: Izmir. Once a small fishing town. Today a well known resort town and  a popular cruise port. Winter time population is 114.000 people where this rises  up to 500.000 people during summer days. Mainly Turkish and eastern European tourists prefer  having their holidays in Kusadasi. Because of its close proximity to the ancient  city of Ephesus, a lot of cruise ships dock at the cruise port of Kusadasi.

Ephesus, was one of the 4 major cities of the ancient world having population over 200.000 people. Selected as the capital of Asia Province of Roman Empire by the nephew of Julius Galius Caesar known as Augustus, named as Octavius. Served as a capital until Constantine ordered the expansion of another city located 400 miles north of  Ephesus. He named this city as Constatinopolis and selected this city as the new  capital. Ephesus today, considered as one of the most well preserved ancient  cities of the world. 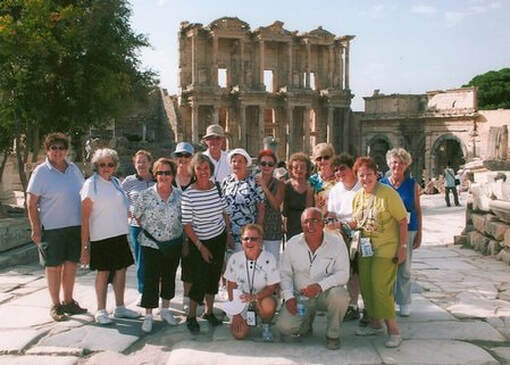 Private Ephesus Tours
Below please find suggested itineraries designed for cruise travellers. If you would like to make a combination of the sites just contact us. For tour bookings please click here for Tour Booking Form

* For the reservation, kindly advise us the following:
- Your Full Name
- Number of people in your party
- Date of Arrival
- Name of the Cruise Ship or Hotel
- Time to start the tour
- Tour code or name

KUSADASI - No:1
Halfday (3.5 hours) Tour of Ephesus & Temple of Artemis
Meet with your guide in front of the Kusadasi  port passenger Terminal. Drive to the country. See the TEMPLE OF ARTEMIS, one of  the wonders of the ancient world. Then a visit to EPHESUS is a visit to one of the best preserved ancient cities in the world. Ancient  historians believed that  Ephesus was founded by the Amazons, but now, it is believed to have been the  Hittite city of Apasa. With your guide, you will see the Odeion, where the  advisory council held its meetings and the Baths, as well as many other columns,  monuments and ruins, including the Celsus Library. En-route to Kusadasi enjoy  the scenery or shopping opportunity.

KUSADASI - No:2
HalfDay (4.5 hours) Temple of Artemis + Ephesus + House of Mary
After meeting your guide drive through the fertile lands. Your first stop will be the Temple of Artemis, one of the 7 wonders of the ancients world. Afterwards proceed to the mountain where Virgin Mary is believed to spent her 9 years. The house is approximately 1000 feet above sea level and running as an active chapel. Roman Catholics believe that Virgin Mary came to Ephesus with Saint. John 5 years after the crucification. At the age of 63 she is assumed to heaven. Although there is no fact that Virgin Mary lived here approximately 1.5 million people visit the site each year. After 30 minutes visit to the House of Mary, drive to ancient city of Ephesus. You will be dropped at the upper gate of Ephesus with your guide. Start exploring the city. You will be walking down the hill approximately 1.5hrs. You will see the Odeon, the basilica, domitian square, fountain of Trajan, Celcus library, Terrace Houses (optional), Marble street, the Grand Theater of Ephesus and the Harbour Street. You will be endng your tour at the bottom gate. Your driver and guide will take you to another site or drop you at the desired location.

KUSADASI - No:3
Fullday (7 hours) Tour of Ephesus - Christian Ephesus
Meet with your guide in front of the Kusadasi port passenger Terminal. Drive  to the country. Your first stop on this fascinating tour is at the HOUSE OF VIRGIN MARY. Then, you will continue on to visit ancient EPHESUS, one of the most magnificent and best-preserved ancient sites in the world. See the Odeion, the Market Basilica, Curetes Street, Bath, Celsus Library, Marble Street and the  Great Theatre with a seating capacity of 25,000 people. Afterwards visit the  BASILICA OF ST. JOHN and see the TEMPLE OF ARTEMIS, one of the wonders of the  ancient world. En-route to Kusadasi enjoy the scenery or shopping opportunity.

KUSADASI - No:4
Fullday (7 hours) Ephesus & Villages
Meet with your guide in front of the Kusadasi port passenger Terminal. Depart the pier for  the 20 minute drive to one of the 7 wonders of the ancient world: TEMPLE OF ARTEMIS. After seeing Temple of Artemis drive to the magnificent ancient site of  EPHESUS. Ephesus is the best preserved of the Greek/Roman cities in Anatolia  and  while you are visiting the ancient ruins of this magnificent site, your guide  will bring them alive. You will see the beautiful Celsus Library, restored and  reconstructed according to its original form by the architect Friedmund Hueber  in the 1970's. The most spectacular building of Ephesus is the Grand Theater,  built during the Hellenistic age to hold 25,000 spectators. It is there that St.  Paul preached. Opposite the Temple of Hadrian are the Hill Houses, homes of  Ephesus' wealthy citizens. The city was also the hometown of great
philosopher  Heraclitus. After a visit to Ephesus Antique Site, you will arrive at SIRINCE  VILLAGE. This old Orthodox Village, 30 km from Kusadasi, was once  "Cirkince"(ugly). Indeed its inhabitants gave this name on the purpose as they  did not want to be bothered by foreigners nor to share the beauty of their village. Still after years, visitors understood that the village was not ugly and called it "Sirince" (pretty). Today the village is a perfect synthesis of Turkish-Greek culture as of the 1920's; after the Turkish Independence War, people exchange between Greek and Turks has occurred and all those typical Greek  houses, though they kept their original outside characteristics, have received  the local layout inside. At Sirince Village you will have chance of seeing the  local life at a village and purchasing some small local souvenirs and  handicrafts. The village is also famous for its local grape and other fruit wines. Your last stop will be the visit to the ISA BEY MOSQUE, a delicate masterpiece of Turkish architecture from the fourteenth century.

KUSADASI - No:5
Fullday (7 hours) Temple of Artemis + Ephesus + Kirazli Village
Boarding your vehichle at port of Kusadasi, drive eastwards to Selcuk  Town.. En-route see the cotton fields, olive groves and pine forests  while  driving along the blue Aegean shores. Your first stop will be The Temple of  Artemis, one of the 7 wonders of the ancient world. Continue to Ephesus  where  you start at the Magnesia Gate and walk downhill through the city.Your guide  will point out the sights, bringing the history of Ephesus to life as you  pause  at the Odeon, Upper Agora, Town Hall, Fountain of Trajan, Temple of  Hadrian and  Domitianus, Memmius Memorial, Roman Baths, Terrace Houses and the extarordinary  Library of Celsus. At the end of a marble street leading from the library, gaze  up at the impressive theater, built to seat 24.000 people. Here St. Paul  preached to Ephesians. Afterwards proceed to the quaint Village of  Kirazli. Meet  with locals, witness the unspoiled local life. See real Turkey !. Afterwards  drive back to Kusadasi Port.

KUSADASI - NO.6
Fullday (8 hours) Priene, Miletus, Didyma
(This tour is recommended for travellers who have visited Ephesus)
(This Tour is designed for 2nd timers to Kusadasi who have visited Ephesus)
Meet with your guide in front of the Kusadasi port passenger Terminal. Following the departure from the pier, the first stop will be PRIENE. The ancient harbor city of Priene probably changed its location when the silt of the Meander River threatened to bury it. Now it is nearly 16km away from the sea. The original place of the city has never been found but it was probably a peninsula with two harbors. Priene was laid out on a Hippodamian system of grid plan at the foot of a spectacular cliff on mount Mycale and contained many famous examples of Hellenistic art and architecture. All the streets intersect at right angles. Next visit MILETUS, an ancient city located near the mouth of the Meandros River. Miletus owed its importance to its position on the trade routes. It was one of the largest cities in Anatolia. Highly prosperous, it founded many colonies and was the home of the ancient philosophers Anaximander, Anaximenes and Thales, the town planner Hippodamus and architect Isidorus. Having a prominent position, Miletus became the most important port in this area and it was the most active member of the twelve cities of the Ionian Confederation. From the 7th century B.C. the city has been controlled in turn by the Persians, Roman and Seljuk Turks. The last visit in the tour will be DIDYMA. The world Didyma meant "twins" and it was associated by some as being the meeting place of Zeus and Leto to have their twins Apollo and Artemis. Didyma was famed as a prophecy center dedicated to Apollo, which served a similar purpose as the Delphi of Anatolia. It was not a city but a sanctuary linked to Miletus by Milesians with a 12 mile sacred road.
Kusadasi Cruise Port Meeting Point

Kusadasi Port Meeting Point
Your private tour guide will meet you in front of Kusadasi Port Passnger Terminal. He will be holding your name sign.
​
For tour enquiries and for more information, please contact us.
TransBalkan Tours is a fully licenced tour operator and a member of TURSAB. License: A 776.